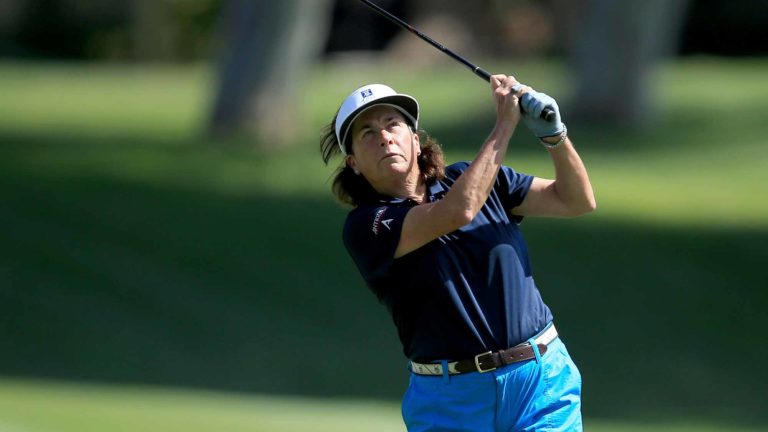 On episode 13 of the On The Green Podcast, I had the absolute pleasure of speaking with women’s golf icon Amy Alcott. Amy is an LPGA and World Golf Hall of Famer. During her impressive and historic career, she has overall won 33 times around the world, including five major championships and, at one point, she won at least once in 12 consecutive years. Now, Amy is a writer, golf course architect and entrepreneur. On the podcast episode, Amy and I talked about everything from how she got started to what the future of women’s golf looks like to her. Keep reading to get some episode highlights, and listen to the full podcast episode above.

Amy grew up in West Los Angeles, and like many children of the 60s and 70s, she considered herself to be a child of television. Her first golf memories were watching the CBS golf championship and being fascinated by the way the male golfers effortlessly hit a stationary ball, which was so different from what she did playing tennis. She asked her dad for some golf supplies, and he dusted off a forgotten 25-inch club that was covered in duct tape. In her front yard, she used that club to putt into soup cans and practice her swing using a yard sprinkler as the hole.

Eventually, with the support and encouragement from her family, Amy started playing junior golf. At the time, she was the only girl playing against all boys, but she still looks back fondly on those days when she initially fell in love with the sport.

Instead of going to college, Amy turned pro right after high school. This ended up working out in her favor because just four years later, Amy won the 1979 Peter Jackson Classic in Montreal, which catapulted her lifelong career. What many people don’t know is that Amy played the entire tournament while sick with the flu. Despite having a 101 fever, Amy won the tournament by sinking a 70-foot eagle putt on the final hole. She remembers the crowd going nuts because she made an eagle on the last hole, but she couldn’t understand their cheers – in Montreal, the locals speak French!

The Future of Women’s Golf

If there’s one thing that excites Amy, it’s thinking about the future of women’s golf. And for her, the future truly lies in junior golf, which she calls “the lifeblood” of the game. She says that the golf community has made a real effort reaching out to young people because they’re the future of the game. “It’s very important to support junior golf because that’s where the love of the game starts,” she said. “It gives young women a real solid core, and it builds character.”

Amy Alcott is an icon in the world of golf and someone who has a wealth of knowledge about the game. Be sure to listen to the podcast episode to hear our full conversation!